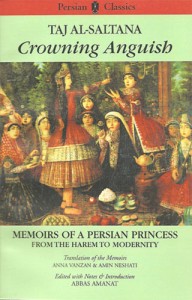 Now almost one hundred years later Taj’s memoirs are relevant and qualify her not only as a feminist by her society’s standards but also in comparison with feminists of her generation in Europe and America. Beyond her fascination for the material glamors of the West at the turn of the twentieth century–fashion, architecture, furniture, the motorcar–she was also influenced by Western culture’s painting, music, history, literature and language. And yet throughout this time she kept her bond with her own literary and cultural heritage and what she calls her “Persianness.”